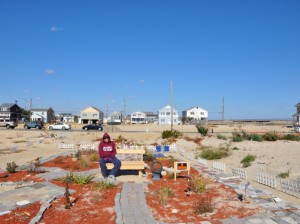 Hurricane Sandy was the natural disaster that swept across the United States eastern seaboard and wrecked everything in its path. So much devastation has overtaken the lives of many people. Billy Mullen, one such surviving individual, has lost his home and everything he owned. Without the money to rebuild the once well established house, he now lives in a small rented apartment. After some time, he turned his empty lot into a garden memorial. Here is his story:

Mullen made it a habit to visit his lot several times a day. His parents owned a little bungalow right next door, and he remembers growing up coming into this home to visit his aunt. He found that he couldn’t just leave this lot empty, because it was so full of memories.

Day after day, sitting in the midst of the destruction, he decided to keep busy by planting a little garden. The air is so salty near the ocean, and it is something he missed. Coming to this spot with his little homemade garden, gave him the opportunity to breathe in that mist again and again.

It didn’t take long for his neighbours to see what he was doing and offer help. They brought water for his plants and a little bench was built in honour of his parents. This handmade garden was now a garden memorial to the people who raised him and have gone on before. Now this little lot is a beautiful representation of memories of a childhood and precious people that loved their son.

Mullen has the hope that his home can be rebuilt and he can get out of the small apartment. He has applied for the government program RREM. If he does receive the $150,000 that is being offered through this grant, he will most certainly be able to rebuild a home on this lot. He is still saddened that even if he qualifies for the grant, that he will never be able to rebuild what was lost. That home and life he lived in will forever live in his memory.

In the meantime, this garden memorial will stand. Mullen will continue to sit out and sip the salty air on his lips while sitting on the carved memorial bench that says, “In loving memory of Angie & Bill Mullen”.